I would like to say a huge Thank you to every-one involved in this July holiday cricket camp. My son Joshua absolutely LOVED it and burst into the door each day to tell us what he had done or learnt that day. Thank you once again for all your time and effort and for the comprehensive and useful assessment report.
I just would like to thank you and the excellent work that your coaching staff did over the last cricket clinic. My Son Colorado has taken all the information he learnt and applied it to his first bat in the U12’s for his team Nerang “The Bushmens” with a 50 not out. I know this is the 1st bat of the season and a long way to go however he said that the clinic helped him in focusing, letting balls go and waiting for the ball. Here is what his coach said “it was a very mature knock. He came in during the first over, when we lost one of our openers, and batted through to about the 43rd over when we had to retire him at 50. He was the anchor for the batting innings.
Kids were pleasantly surprised. Have never seen some of the practice drills and really enjoyed the variety.
Boys are kept focused and controlled….. My son wants to do another clinic and usually he avoids holiday camp activities!
Holiday clinics started on time each day
Clinic was well-run with a good rotation of activities
My child really enjoyed it and is keen to attend the next one!
I just felt comfortable leaving my child with qualified, caring staff who were capable and friendly
The clinic was very good and Josh enjoyed himself. Thanks to you and your team. Over Monday and Tuesday this week Josh tried out for the NSW CIS primary cricket team and was selected as part of the final 12. Your clinic helped to keep him motivated and he learned new things.
Having teachers as head coaches was a good idea that worked really well
My son had a brilliant time
Coaches were very professional, interested in the kids and fun. Luca had such a great time and would love to do it again
The professionalism and ability to develop skills were excellent aspects of the clinic
The care taken in looking after the children meant I was confident leaving my child at the clinic
Thank you for a great 3 days of cricketing fun
My son made new friends and was up each morning ready to go the clinic!
A very well-organised and professionally-run program – I thoroughly recommend it

Thank you, Geoff and team, for all your efforts in spite of the adverse situation we could get coaching during this pandemic period which I feel is a great outcome. I am looking forward to the upcoming cricket season with hopes everything goes as planned.
Alex had a great day at cricket today.  Came in at first drop after the opener (our best batsman) was bowled on the first delivery of the day.  Alex batted for 20 overs and was forced to retire on 40. He didn’t look like getting out and it was his highest score ever by far. Lots of fist pumps as he walked off. Thank again for everything you and your coaches have done in such a short amount of time.  There is no better feeling than watching your son play sport with confidence and enjoyment.
Thanks so much for helping Alex.  He loved the session with you on Friday and was keen to put into practice what you showed him. He played today, so I thought I’d let you know how he went.  First innings he kept wickets so didn’t get a bowl, but did a great job. The oval was in poor condition (long grass) with poor value for shots. Opposition scored 66 off their 25 overs.
When it came time to bat, he looked really good.  A parent who knows his cricket noticed his new more upright batting stance and commented how good he looked.

He batted for 8 overs, worked really well with his partner and didn’t look like he was going to get out.
He eventually got out hit wicket for 6, trying to swat one away down leg side. It was a 22 run partnership in 8 overs, coming in at 4 for 37. It was really awkward delivery.  The young girl was bowling her deliveries way above the eye line.  They were landing on a length but bouncing above the shoulder.  All the boys were having difficulty with deciding what shot to play. He was disappointed because he said you mentioned to him to control his bat on those shots.  It is a mode of dismissal he has been out to a few times over the past couple of seasons. So perhaps something to work on at the next session.  But I was so happy that he had listened, absorbed and gained so much in a short time with you.  A real credit to your ability as a coach. I should also mention that we engaged you after Alex said 2 weeks ago that he wanted to give cricket away.  He was low on confidence and not enjoying it. We didn’t want him to make that decision before experiencing some good coaching. A session with Reagan and you has completely turned everything around.  He said to me today that he no longer wants to give it away and can’t wait for Friday training. I can’t wait to see how he progresses from here.

Geoff and his team coach brilliantly, teaching the basic and more advanced skills with much enthusiasm and fun. Thanks to them, my son has progressed from being an enthusiastic scatter-gun to being an accurate bowling whiz. We can’t recommend them highly enough to parents and players
My child improved his own confidence as well as his cricket skills
My child was thrilled to learn spin bowling
Positive feedback was a feature that I (and my son) really appreciated
The use of a video to analyse my son’s bowling was great in getting him to understand both what he need to improve, and how to actually achieve it
Nicholas’ SPX team managed to squeeze into the semi’s of the u12 competition despite most of the team being u11 players and whilst they weren’t successful they played excellent cricket. Nicholas was ‘Mr Reliable’ with the ball, consistently opening the bowling on merit, he managed 5 genuine wickets in the season including 2 wickets in the last 2 games that he created. First was bowled and he said after the game ‘I could just see a gap between the bat and leg’, and in the semi an LBW where he recognised the batsman was moving in front of the stumps every time.
Just thought I should drop you a note Thomas’ St Pius team played out the NSJCA U14 Grand Final yesterday at Oxford Falls and came away as Premiers, Thomas opened and scored 20 off 24 balls on a slow scoring pitch and played with a maturity that has really come from the camp at Kings with your guys.
We will see you again leading into next season, enjoy the Winter sports.

Thank you to Coaches Nick and Sam for their fantastic work at Dhillon’s 10th birthday party. We had a group of 16 boys between the ages of 5 to 11 years and of differing levels of ability. They were able to organise the games so that the session was both interesting and challenging for everyone. All the boys were able to fully participate and thoroughly enjoyed themselves. We would highly recommend your party and Coaches Nick and Sam for any cricket or general sports fans. Thank you also for the ease with which you organised the party for us!
I would like to say a big thank you for your two wonderful coaches for Oscar’s party yesterday. The weather was cold, windy with rain in between, but the two coaches were warm and enthusiastic, the boys were very much engaged and had a fabulous time, especially Oscar. Thank you very much.
Nick and Liam were brilliant! They had the kids busy and very interested the whole time with activities. The diamond batting drill at the end was also very good to keep their focus. All the kids thoroughly enjoyed it and for many had a very positive first cricket experience.

Cam and the boys did a fabulous job with the party yesterday. All the kids looked like they were having a fabulous time. My boys definitely had fantastic time and haven’t stopped talking about it. I was very impressed with Cam and the team – they were punctual, organised, great at keeping the boys engaged and thoroughly embraced the theme. It’s so nice to have that party done, and for it to go so well. Thanks for all your help

Just wanted to say thank you for Sunday. Danny had a fabulous party and thanks to your coaches for doing such a great job. All kids were enthralled
I just wanted to say thanks for a great party today. Cameron and Callum were both amazing with the kids. They were organized, encouraging and lots of fun. The kids all had a fabulous time, especially Isabella
Amil and Cameron did a fantastic job today. Firm and friendly with the boys and kept them entertained throughout. On time and well organised. Lucas had a great day.
I would like to say a big thank you for your two wonderful coaches for Oscar’s party yesterday. The weather was cold, windy with rain in between, but the two coaches were warm and enthusiastic, the boys were very much engaged and had a fabulous time, especially Oscar. Thank you very much.

Thank you for giving my daughter a positive introduction to sport
Activities provided variety and skill development – my child was never bored – she was always active
After years of watching her brother play, my daughter Lily decided she would like to try cricket.  I called Geoff to see if he could help get her started. We decided that the best option for her would be a pre-season training before we committed to a whole season of cricket. Lily completed her first 10 session program and absolutely loved it, she went on to play the spring and summer comp. Lily has gone from strength to strength and with Geoff’s great direction and patience she has become a confident young cricketing woman.
We couldn’t be happier that our daughter has embraced the love of the game.
Thanks Geoff!

Thankyou for being such a great coach to Harry – he said to me the other day, just sitting in the car, “Mum, Geoff is such a nice man
A big thank you to your team of very enthusiastic professionals, I enjoy watching you guys in action as much as the boys enjoy coming
Coaches looked and acted professionally and shared their love for the game
Coaches conduct themselves in a professional and friendly manner
My child learnt correct techniques from caring, professional coaches 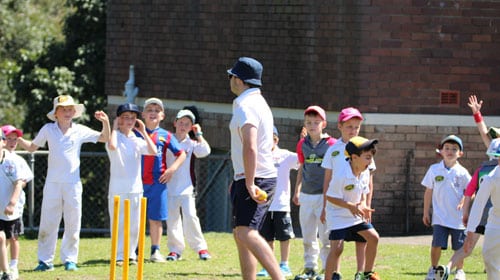 Geoff Spotswood is an expert cricket coach (Level 3) and leading educator who coaches all cricketers from young beginners to adult players. He is also one of the few sportsmen who have played first grade cricket and rugby league.

Geoff also runs school holiday cricket clinics in locations throughout Sydney where young cricketers can learn and develop their skills in a safe and friendly environment. Additionally, our accredited and friendly coaches can organise fun filled cricket and sport themed games at your child’s birthday party and bring all the equipment needed.

Since 1991, Geoff has coached thousands of your cricketers of all ages who have all improved their skills and love of cricket under his expert coaching and guidance.